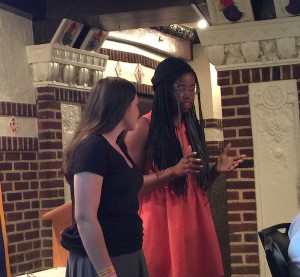 It was a day to celebrate young people, their families and other guests at Lawrence Central Rotary on August 12 when two Lawrence teen-agers presented a program about their experiences in a sister city exchange this summer and Kevin Munge, an exchange student from Helsinborg, Sweden  was introduced.

Nia Rutledge and Haley Lockwood-Peterson each  spent 10 days in Hiratsuka, Japan, living with local families, soaking up local culture, going on field trips and even taking time to do some shopping. Nia had made a video of the highlights of her trip and  Haley passed around pictures she had taken.  Both had been sponsored by Central Rotary and were at the meeting with parents and grandparents.

Lawrence youth in grades seven to twelve are eligible for a Sister Cities’ Exchange Program that involves 10 days in a Lawrence Sister City. Ken Albrecht of the Sister Cities’ Advisory Board also attended the meeting and thanked Central Rotary for its support of  what he called “a very worthy project.”

Haley said she would like to be bilingual and believed this was a good start.  She is still in contact with the families who were her hosts. Nia said her impressions of Japan included crowded streets, the Tabata Festival (similar to our Fourth of July), learning about Japanese food and a fireworks display on her last night there.

Kevin, who had only been in Lawrence for two days, said he is adjusting quickly and is looking forward to playing soccer at Free State High School where he will be a senior this year. 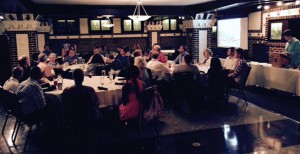