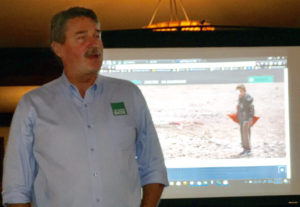 Leawood Rotarian Jeff Deatherage spoke to Lawrence Central Rotary about ShelterBox USA and his role as a Response Team member.  The ShelterBox organization is an international nonprofit effort to provide shelter and vital supplies in response to disasters and humanitarian crises. The program is most known for the distinct green plastic boxes containing tents, blankets, ground covers, water storage and purification devices, solar lamps, cooking supplies, a basic tool kit, mosquito netting, and a children’s activity kit.  ShelterBox response is tailored to each unique situation as only the supplies that are needed are distributed.

The idea for the program was developed by a local Rotary Club in Cornwall, England in April 2000.  This project was quickly adopted by other clubs and has grown into an organization with twenty international affiliates.  ShelterBox has responded to 270 disasters in 95 different geographic locations and served over one million people.

Jeff explained the work requires considerable coordination and communication with local officials and other aid providers.  The world -wide network of Rotary is heavily depended on to accomplish deployments of supplies.  Presently, ShelterBox has representatives and assistance on the ground in Syria in preparation to assist 300,000 civilians trapped in Aleppo by fierce fighting.

Jeff explained that his role as a ShelterBox Ambassador involves periodic training and a willingness to deploy for two weeks each year.  Jeff has deployed to Paraguay for flooding, the Philippines after a tsunami, and twice to Oklahoma for tornado relief.  He makes numerous speaking engagements each year and often sets up demonstration tents and supplies as he did for the fall LCR Community Bike Ride.   He thanked LCR for past support of ShelterBox and presented the club with a Shelter Box Hero award.  More information is available at shelterboxusa.org.

Lawrence receives Bronze Rank from the American League of Bicyclists