Artificial Intelligence: What Does it Mean to be Human

May 17, 2019 / admin / Comments Off on Artificial Intelligence: What Does it Mean to be Human 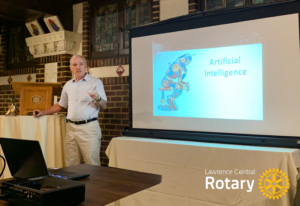 The news is full of stores about artificial intelligence (AI) including self-driving cars and even facial recognition technology and its ethical application.  AI is also the subject of speculative science fiction and futuristic tracts.  Is the end of humanity at hand?  David Mannering provided a short history of AI and its potential to serve us.  Mannering’s background includes graduate study at KU, forty years of working in IT including service of fifteen years as chief information officer.  He also worked for the State of Kansas Department of Revenue and taught programming and information systems management.

Mannering began with Alan Turing, a British mathematician, who developed a theory of computation while working on government security projects in World War ll.  He developed a binary system of communication that made machine driven computation possible.  Computing science and the idea of AI had to overcome huge obstacles in the early years.  In 1997 an IBM computer named Deep Blue defeated the reigning world chess champion.  Mannering stated this was not really AI at work but sophisticated programming.  True AI involves learning and not just the retrieval of information.  Still, Deep Blue got the world’s attention.

Ray Kurzweil captured the moment with his nonfiction work “The Singularity is Near” and we have been talking about what it means to be human ever since.  Is Mannering worried about where AI is headed?  He replied he would not lose sleep over AI as we have the power to determine its use.  Let us hope for responsible utilization of this amazing technology.